“Meet the WiSE woman behind the SciComm Symposium”

By Gretchen Geibel and Aggie Mika

From roaming through Montana while dabbling in documentary filmmaking to singing and writing science-y songs in a two-man band with her husband Derek, Tess Eidem is not your typical postdoctoral fellow. The energetic, permanently good natured and fascinatingly organized Eidem has a passion for communicating science in unique ways and a knack for bringing like-minded people together.

One of Eidem’s many passion projects includes the annual Women in Science and Engineering (WiSE) Science Communication (SciComm) Symposium. Eidem started the Symposium to help bridge the disconnect between researchers and the general public. And, she wanted to equip young scientists with the skills to easily communicate their work with other people.

“Graduate school and postdoctoral training makes you a highly qualified scientist, but it does not give you practical skills like how to talk to anyone on the street about what you do and why that is important. [We] wanted to provide WiSE members with science communication skills and highlight non-traditional STEM careers in SciComm,” she says.

This year’s SciComm Symposium will take place today, Friday, April 21, from 1:30 p.m. to 5:30 p.m. in the Sustainability, Energy and Environmental Complex (SEEC) on CU’s campus. The Symposium is for scientists and the community alike, with interactive activities, TED-style talks from CU scientists, and presentations by professional women in “non-traditional” STEM careers on the importance of communication skills. 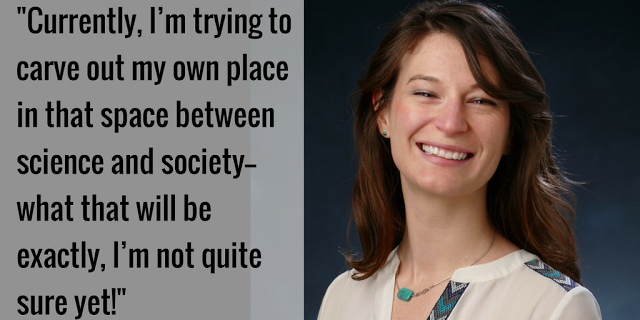 Interactive activities include #tweetyourthesis, where attendees will practice describing their work in 140 characters or less. Eidem’s tweet would look something like this: “I study how genes are turned on & off & how cells control the dimmer switch. Could use biological switches to treat disease.”

“We’ve received so much positive feedback about the SciComm Symposium,” Eidem says. “It keeps me motivated to continue to find the spaces between science and society and figure out how to get more people in that ‘in-between.’”

While much of this year’s Symposium focuses on written and oral science communication, Eidem is also passionate about communicating science through film. “I never would have got into film if it wasn’t for my husband, Derek,” she says, citing his rare ability to create “all sorts of magic out of thin air” as her inspiration. “He and I worked on a few science videos when I was a graduate student, and I got hooked!”

While Eidem was excited to learn more about both the technical side of filmmaking and how to tell a story through film, she was most excited to meet her cohort of science filmmakers. “Meeting motivated people who share similar values and passions is so inspirational…basically, I’m ready to have my mind blown!”

Over the course of the six-day workshop, each group made a mini-documentary about local issues such as land conservation and wildlife defense. “Our group worked with the World Wildlife Fund (WWF) to make a 3-min film describing their efforts to team up with ranchers to promote sustainable ranching practices and help preserve the prairie. It was pretty close to my heart, since I grew up in Nebraska and had a summer of undergrad prairie research under my belt,” says Eidem.

While Eidem works to reach new audiences through film, she’s also busy working with the next generation of scientists. Using a board game she created called “Transcribe Your Genes”, Eidem teaches children and parents alike about gene transcription. Kids take turns moving their game pieces along a DNA “road” that winds across the game board, turning on genes that their cells need to survive along the way. “[The game] also opens conversations about how genes can be turned on at the wrong time, which can cause diseases like cancer,” she says. “I’m always trying to make science fun!”

More recently, Eidem has been thinking a lot about how she can integrate her interests in both science communication and music. She envisions herself composing the soundtrack for science films or writing science songs with her husband and their band, Under the Eaves. “I already have a song called ‘I’m Likin’ my Lichens’ that I started back in college after taking a lichenology class with my favorite professor, Dr. Egan. I’ve got to polish it up a little, but maybe I’ll start there!”

Unsurprisingly, Eidem envisions a career for herself that satisfies both her analytical and creative sides. “Currently, I’m trying to carve out my own place in that space between science and society—what that will be exactly, I’m not quite sure yet!” A relatable sentiment for most non-traditional graduate students.

“Believe me, it’s hard for a scientist to move down a path that is not well defined,” she says. “I often have to shush my analytical side and let the creative side make peace with the future unfolding as it will. I’m learning how to be okay with the unknown.”